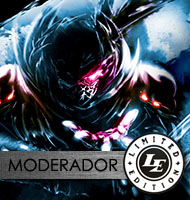 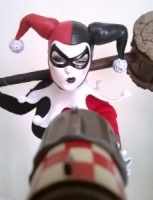 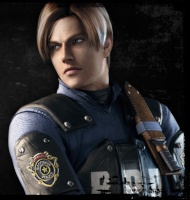 threezero escreveu:
We been working for a while now with extremely talented Dan LuVisi to create Gabriel from his comic's graphic novel L.M.S: Last Man Standing: Killbook of a Bounty Hunter. Gabriel—last of a genetically engineered breed of supersoldiers known as the Paladin, genetically created and designed to be physically perfect, Gabriel is the closest to a God we’d ever see. Highly intelligent, fast, powerful and not to mention nearly invincible, Gabriel had one purpose, and one only: to help win a war that the humans of earth could not.

This July we were excited to present LMS Gabriel prototype sample at SDCC and want to share these photos with you. LMS Gabriel collectibles is around 13.5" (around 34cm) tall.

Dan LuVisi biography:
Dan LuVisi is an artist currently residing in sunny Southern California. After working as an illustration and conceptual designer for several companies such as Microsoft, 20th Century FOX, Universal, DC Comics and more, Dan decided to venture onto a new project which would soon become LMS: Last Man Standing.

After releasing LMS: Killbook of a Bounty Hunter in 2010, Dan has been working away on several new IPs and continuing to build the world of LMS, with the upcoming first volume, Welcome To Amerika, coming out at the end of 2014.

He's also very in love with his two cats.

Dan is now putting together Section 9 Entertainment with his business partner Stephan Lokotsch, and several other artists in hopes of building new worlds and IPs for the years to come.

You can find more about Dan LuVisi, his art and L.M.S: Last Man Standing on his website:
http://www.danluvisiart.com/aboutdan.html